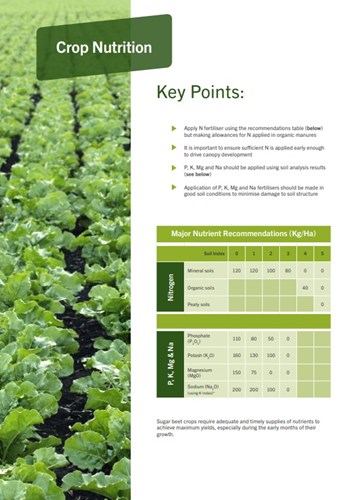 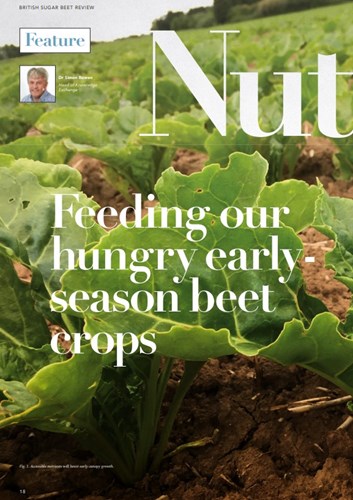 Nitrogen (N) is a major component of the proteins and enzymes that drive plant growth. It is essential for the rapid development of the leaf canopy and the capture of solar radiation during the early stages of sugar beet growth.

As an example, a typical sandy loam soil with less than 2% organic mater, receiving no organic manure will have 60kg N/ha available after a cereal crop and a further 60kg N/ha may be mineralised during the season. Along with 120kg N/ha of applied N fertiliser this would provide a total of 240kg N/ha, sufficient to support maximum yield. Sufficient N is therefore required during the early stages of growth to enable shoots to acquire the 90-120 kg N/ha required to produce the three units of leaf area index needed to fully cover the soil and maximise radiation interception. Excessive or late uptakes of N do not increase yield, only beet impurities.

The sugar beet yield response curve to nitrogen is based on extensive trials work by both the former Broom’s Barn Research Station and more recently by BBRO. Over 150 trials have been undertaken across a range of soil types, and seasons providing a very reliable and consistent response to nitrogen. Based on these data sets, a representative nitrogen response curve for sugar beet is presented below. 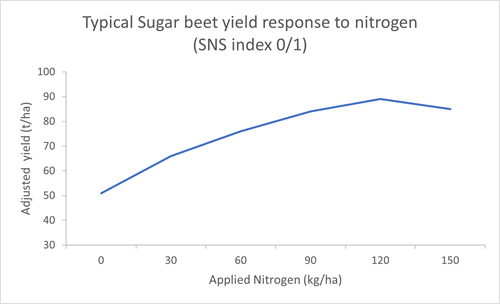 With the current trend towards high nitrogen prices, the economic optimum is less than the current recommendation of 120kg N/ha.
Depending on fertiliser costs, the economic optimum is between 75 and 90 kg N/ha. Reducing the rate to 75 kg N/ha is likely to risk decreasing yields too much and will affect overall crop profitability of many commercial crops. Reducing rates to 90-100 kg N/ha is a sensible compromise.

Placement of some of the nitrogen requirement (banded 5-10 cm below and to the side of the seed) has shown that crops can access and utilise N more efficiently. Typically, placement of 40-60 kg N/ha is placed, the remainder being applied at emergence. This frequently improves early canopy development and in some instances plant population. Yield responses of 10-20% have been recorded. Yield responses tend to be greater in dry springs/seedbeds.
Additionally, a reduction in overall nitrogen rates of 15% have been achieved where placing nitrogen in a band to the side and below the seed. Commercial strip trials have shown that reduced rates from 120 to 100 kg N/ha can be achieved. There is limited data on reducing rates more than this using placement techniques.

Sulphur (S) is a structural component of enzyme proteins, the sulpholipids of cell membranes, and plant polysaccharides.

The uptake of S by well grown crops is around 50 to 70kg S/ha and those of a high yielding crop closer to 100kg S/ha. Crops may suffer from sulphur deficiency especially higher yielding crops grown on sensitive soils (sands, sandy loams and shallow soils) and where there is no routine use of organic manures in the rotation. Where deficiency is possible, previous trials of 10kg S/ha (25kg SO3) was as effective as higher rates. Higher rates of sulphur (40-50kg SO3) are likely to be needed where the yield is expected be greater than 80-90t/ha. A new programme of BBRO trials is currently assessing this.

Sulphate containing fertilisers are likely to be needed in sugar beet crops grown on sands, sandy loams and shallow soils, where there is no routine use of organic manures. Consider applying 25-50kg SO3/ha, depending
on the likelihood of deficiency. This can be estimated by the appearance/history of deficiency symptoms appearing in more sensitive crops such as oilseed rape and barley.

Magnesium (Mg) is the central metallic ion of chlorophyll and an essential co-factor for energy transfer, and so essential for photosynthesis and respiration.

Surveys suggest that three quarters of the current national sugar beet area is currently at, or above, Mg index 2.

Potassium (K) is the main cellular solute that allows plant tissues to regulate their water content and osmotic balance. This maintains the cellular rigidity (turgor) needed to drive the growth and control the photosynthetic activity of the leaf canopy. It also acts as an activator of the enzymes involved in the production and transport of sugars. Under some circumstances sodium (Na) may replace K as an osmotic solute.

Well grown sugar beet crops contain 350-500kg K/ha, two-thirds of which is used by the shoot and one third present in the storage root at harvest. This is equivalent to soil index 2-. Yields will be reduced on lower K index soils if insufficient potash is applied.

Sugar beet crops require a concentration of 120 to 180mg of exchangeable K/g soil to achieve maximum sugar yield. This is equivalent to a Soil Index of 2-, and almost half of the potential sugar yield is lost on soils that are at K Index 1, and three quarters on those at K Index 0.

Sugar beet is often the crop in the rotation used to adjust P and K status of the soil for the rotation as a whole, however, applying fresh K prior to sugar beet rarely increases it yields even on low K-Index soils.

Recommendations based on the following considerations:

These recommendations require the current K status of the soil to be known from soil sampling and analysis. The amounts of K removed in the harvested beet can be estimated from the tarehouse data of loads delivered to the factory (contact British Sugar to access this information). Alternatively, approximate offtakes can be calculated by using the Potash Development Association’s conversion factor of 1.8kg K2O/t beet, but this ratio is extremely variable.

Sugar beet is one of the few crops that tolerate Sodium (Na) and can use it as an alternative osmotic solute to potassium. Large amounts of agricultural salt have, therefore, been applied to UK sugar beet as a cheap alternative or addition to a K fertiliser for many years.

The two nutrients are not, however, completely interchangeable. Recent research has shown that sugar beet grown on soils that are low in both exchangeable K and Na respond to applied sodium. Furthermore, it has now been shown that very little of the applied Na fertiliser is taken up when crops are adequately supplied with K.

It is, therefore, probable that agricultural salt is currently being applied in many situations where it is unlikely to benefit the crop. Recent surveys, show that much of the UK’s sugar beet is grown on soils with K Indices of 2 and above but these also receive an average of 160-170kg Na/ha which will be of little benefit.

Na can partly replace Potash in the nutrition of sugar beet when soils contain too little crop available Potash. An application of 200kg Na2O/ha is recommended for beet grown on soils at K Index 0 and 1. On K Index 2 soils it is only necessary to apply 100kg Na2O/ha when the soil contains less than 25mg Na/kg. Fen peats, silts and clays usually contain sufficient sodium and no fertiliser sodium is recommended. Sodium at the recommended
rate has no adverse effect on soil structure even on soils of low structural stability.

Phosphorus (P) is essential in plants for:

Surveys suggest that over 90% of the national sugar beet area is currently at, or above, P Index 2. Most of these soils continue to receive and average of around 60kg P/ha which is sufficient to maintain them at this level.

Share on
BBRO is a not for profit making company.
We are set up jointly by British Sugar plc and the National Farmers' Union.